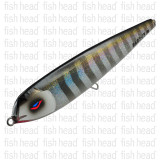 The Real Mahi Mahi (casting model) from Sea falcon is a new concept designed to imitate the profile and swimming action of a juvenile Mahi Mahi. Weighing in at 180g it casts well and will sink with a fluttering motion with the head a little lower than the tail. When worked it swims with an awesome 'S' shape creating plenty of commotion to draw fish in. This lure has been effective on a range of large predatory species such as Kingfish, Mackerel and Giant Trevally.

With a thick resin coating that surrounds a balsa core, our lures use a hybrid structure that can only come from the extensive know-how of Sea Falcon.

Due to the resin coating, the lure is not easily damaged when tuna or other large fish bite the lure. Therefore, unlike typical lures, the lure does not absorb water and become heavy, which slows the movement of the lure.

In addition, beginning at the design stage, we pursue the perfect balance for the balsa and weight. By adjusting the buoyancy, we have achieved extremely accurate lure control.

AU$90.86 (Ex. Tax)
AU$99.95 (Inc. Tax)
The Dual Flash 180 Floating Stickbait by Sea Falcon The Sea Falcon Dual Flash is a diving pencil that weighs 65g. It is an excellent mid sized lure for Tuna, Kingfish and GTs. These lures have...
Sea Falcon

AU$59.95 (Ex. Tax)
AU$65.95 (Inc. Tax)
Ultra Squid 120g Slow Sinking Stickbait by Sea Falcon The Ultra Squid, despite looking like a trolling skirt, is actually designed as a casting lure. Steady sweeps, as you would with a regular...
AUD