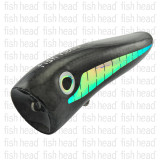 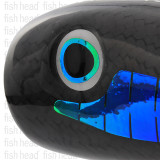 The Hippo popper is a dedicated big fish top water lure, designed and developed over nearly a decade. Hand made locally on the Gold Coast Australia, this carbon bodied lure makes a very big pop for a moderate amount of effort. The body has outstanding durability and strength along with an action that is unmatched by conventional poppers.

The original Hippo lure was a hand carved timber lure, made for a small group of Fish Head clients around 2012/2013. This updated version is designed around a 3mm extra heavy duty plate interior and carbon fibre exterior. The lure is made in 2 stages: firstly a hard foam core, then compression molded carbon fibre outer, for maximum durability with monster predators. The Hippo is buoyant to carry large hooks without being overly heavy, so you can pop for longer with less effort. This lure will work fine with a medium stiffness GT rod or a heavy class rod.

A short sharp popping action creates a big spray and noise along with a tight wiggle from the lure. A long steady stroke allows the Hippo to drag a large bubble trail across the surface while it wiggles seductively.